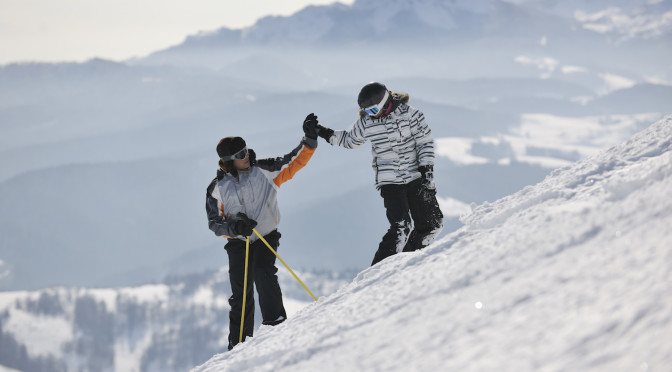 When looking at what types of ski holidays in Austria to go for, as you will soon discover there are plenty to choose from depending on what level of skiing you are at.

Today, as you will soon find out that there are plenty of ski travel companies offering packages, which are designed for those who are only just learning to ski.As you will soon discover these types of holiday packages, actually offer you some of the best deals around and will often include extras that as an experienced skier one would have to pay for.

Generally, on a holiday where you are just starting to learn to ski boot and ski hire will be included in the price, along with the passes that you need take the lift up to the slopes. Plus you will also find that they ensure that the instruction provided is of the highest standard possible. It is these packages that could end up saving you quite a considerable sum of money.

Of all the various companies that now, offer learner skiing holidays they are situated in resorts where they have the ideal slopes for those who are just learning to ski. As well as Austria offering great facilities other countries around Europe such as France, Italy, Andorra, Switzerland and Bulgaria, do as well.
Ideally, when you choose to take a skiing holiday in Austria and are trying the sport for the first time the best time of year to visit is between January and March. This is because that you will find that the slopes are far less crowded, which provides you with more space to actually work on your skiing, plus the instructors will be able to dedicate more time to you also.Another big benefit that one can gain from going to these resorts during the low season is the price you pay for your vacation.  Certainly because these resorts are trying to get visitors to come to them, they will offer great deals in order to do and certainly are much less expensive than if you choose to visit during the high season. When it comes to deciding which resort to stay at during your first skiing or snowboarding holiday to Austria there are a few things that you need to keep in mind. Ideally, you should be looking for a resort where the ski school has gained a good reputation for the instruction it provides, plus they do not charge too much for the lift passes which you need in order to reach the ski slopes.
Also, you should be looking for resorts that not only offer good quality nursery slopes for you to learn the techniques on, but also has slopes that are easy for you to progress to during your stay, as you feel more confident in your abilities. Ideally, you should be looking for those resorts that have several blue ski runs, as these are the ones that are perfectly developed for those who have little or no experience of skiing. Austria falls just after France in the roundup of popular European ski destinations.

Austria is the preferred destination for celebrities and royalty, with its luxurious resorts and picturesque scenery.But there is more to Austria’s ski industry than meets the eye. Not too long ago, it was feared that the entire industry was doomed. Rumors of global warming, coupled with unseasonably warm weather over one or two ski seasons, threatened to drive down the booming business of Austrian ski resorts.
In the 2007-2008 ski season, however, things once again began to look up for Austria. There was plenty of snow, and the tourists came in strong numbers. According to industry  reports about bookings of skiing in Austria were up 2.8 percent from the previous year. The country’s resorts held a 21.8 percent share of the ski vacation market in Europe. Not that Austria ever broke a sweat over the previous year’s temperatures. The Austrian ski resort Klosters has been a favorite Spring destination for Prince Charles and his sons, Princes Harry and William, for many years. In fact, it was during a ski trip at Klosters that the world was introduced to Lady Diana Spencer as Charles’ future wife. This year, the royal family again took to the slopes for a little springtime recreation. They were joined for the first time by Kate Middleton, an accomplished skier who happens to be Prince William’s girlfriend.
In addition to the British royal family, Austria’s ski resorts hosted the King and Queen of Sweden among many other famous faces. Why Austria above other famous ski destinations?It could have something to do with the history of the region. Hannes Scheider developed the modern ski technique in Austria at St. Anton’s Arlberg Ski School. His instruction allowed generations of skiers to turn and stop on their skis: two essential pieces of technique. St. Anton remains one of the top destinations for skiers, partly for its beautiful slopes and partly because it is, for all intents and purposes, the birthplace of skiing as we now know it.
Perhaps Austria’s popularity as a ski destination has more to do with the internationally known Austrian hospitality. When you book a stay in an Austrian hotel or ski resort, you know that you will be welcomed as a part of the family. The locals are more than happy to share their knowledge of the area as well as inside knowledge of the best slopes and restaurants.
Whatever their personal reasons are for continuing with ski school austria, devotees wouldn’t think of taking a ski trip anywhere else. Austrian resorts may not share the same widespread popularity of some French resorts, but patrons wouldn’t have it any other way. When they arrive, they are not overwhelmed by wave after wave of skiers. At most resorts, the slopes are quiet and serene, with just the perfect amount of natural snow.
Austria boasts unparalleled natural beauty and a guest list including royalty and celebrities. But even if the royals stayed home, Austrian ski resorts would continue to bring in a healthy amount of business. This is what Austria is about, and the ski industry there will not soon lose ground. Certainly, there are plenty of ski holidays in Austria, which are perfectly suited to those who are trying this sport for the first time. You can find and book online the courses of the most of experienced Austrian ski schools via TakeGuru web service wich helps to the travellers to easy and secure way how to organize active  trip to the other counrty for fun and self improvement. The main resorts where one can go in this country include Kitzbuhel, Ellmau, Seefeld, Soll, Soelden and Mayrhofen, and all of which offer the perfect facilities not just for first timers but those with a little more experience as well. However to ensure that you find your perfect holiday it is a good idea to keep the factors we have mentioned above in mind.