Why you Should Try Portugal Surfing? 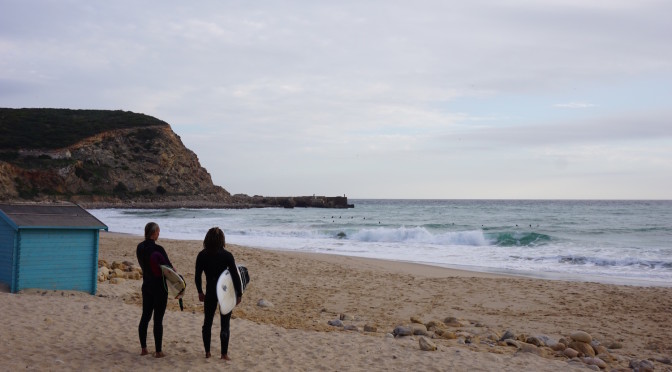 If you are tired from crowd city just go to South-West of Europe and try Portugal surfing.

Portugal is situated in the Southwestern part of Europe and happens to be bordered by the Atlantic ocean to the west as well as Spain to the to the north and east. Portugal is also one of the warmest countries in Europe and boasts of a Mediterranean climate. It also happens to be one of the oldest countries in Europe for those of you who are marveled by historical cities(It has had the same defined borders since 1139, thereby making it one of the oldest nations in Europe).
Other than the fine history and great weather, Portugal also has some of the best solid surfs often resulting from the morning breezes, thereby making it a popular surfing destination. It is said to be a surfers paradise with 364 days of surfing freedom both for learners and experienced surfers. Here are 10 reasons why you should try out surfing while in Portugal:

1. The coastline – You will not have to travel for long from wherever you are to get to the beaches as Portugal’s coastline is nearly 800 km. There are also beaches everywhere from the southern spots in Costa Caparica to the northern spots near Porto. Wherever you are staying in Portugal, it will only take you less than 3 hours to access the beaches and start your portugal surfing experience.

2. Less spending – The cost of living in Portugal is cheap relative to other European countries. This means that you can readily buy or rent surfing gear and have surfing lessons at very low rates. The rates of hotels are also low and you can stay in a hotel for as low as 25 euros per night with fresh breakfast and excellent staff. In a week you might spend less than 300 euros and end up getting more than 20 hours of surfing and meeting new faces from all around the world with the same surfing interests as you.

3. Different surf waves for everyone – Depending on whether you are a beginner or an expert, there are different waves that you can surf based on your preference. It is therefore a great idea to research on your surf spot before hand in order to explore the best waves to accommodate your interests. Also it is best advised for a beginner to plan your surfing holidays Portugal during the summer days when there are generally small to medium waves and during the winter, for the experts, where the waves are bigger and rough.

4. Big waves – If you are looking for some surfing adventure, then Portugal should be on your list of the best surfing destinations(if not the only country in your list!). The Portugal surfing scene holds the record for the biggest wave ever caught at an astonishing 90 ft high that was ridden by Hawaiian Garret McNamara. For the fun of it, you can always knock yourself out trying to break this record.

5. Surf camps – Whether you are travelling solo, with friends or with family, nothing will prepare you for the fun that you will experience at the Portugal surfcamp. These surf camps are more like a holiday house on the beach where one gets to share their own surfing, tanning, dining or exploring interests with other people from around the world. In addition to the surf gear provided, you can also get bikes and long boards in some of these surf camps as well as massages and yoga lessons, for those interested. You will definitely want more of it by the time your holiday comes to a close.

6. Magnificent sights – If you are one who enjoys some alone time during your holidays then you can visit one of the islands that Portugal has. The likes of Azores and Madeira will ensure that you have the feel of paradise. These islands belong to a collection of archipelagos in the North Atlantic ocean known as Macaronesia (islands of the fortunate). The mix of surfing and an ambient atmosphere of relaxation will guarantee you the best time in Portugal.

7. Fantastic food – Ah definitely the food! You might probably not like sardines but you will come to have a liking to them once you are in Portugal. Their cuisines are delicious and the aroma has a way of complementing the North Atlantic Ocean in a magical way. There is also lots of other sea food and fish that you can try as there is always a magnificent sea food restaurant almost in all fishing villages and resorts. Furthermore, you will only pay half the amount required in other European countries, hence take your time and savor the sweet taste of Portugal’s beaches.

8. Surfing events – Every year Portugal happens to host a huge World surfing Championship tour event, Rip Curl Pro Portugal, that brings in the best surfers from around the world. If you want to learn some spectacular maneuvers and have a fantastic time, then you can always plan your surf holiday around this time. The party atmosphere and the friendliness in the crowds makes it an event worth being in. There are also widespread events all through the year that you can attend as well that bring in a lot of people from around the world.

9. Easy to converse – Portugal has a way of adjusting to the language that you speak in, and by Portugal reference is made to the locals. They can be able to converse in English as well as Spanish. If there is one thing the Portuguese are good at, it is their way of distinguishing different languages. Don’t worry about ever getting lost here as the locals will be more than willing to help.

10. Interesting surfing culture – The Portugal surfing scene has some of the friendliest locals and a story is told of Antonio Jonet an Olympian, being the first to introduce surfing after seeing it while travelling in other countries. He surfed using a big wooden surf board that he had obtained from Hawaii but ended up colliding with an old woman, breaking her leg in the process. That was the last he ever surfed! You will definitely get more of other stories as this once in Portugal’s sandy beaches.

As long as you won’t be breaking any old women’s legs, then you should definitely consider surfing in Portugal for a truly magnificent surf holiday!